You’ve probably heard some nonsense about learning the language that 20% of the world’s population speaks. You know, that outdated fact that wasn’t even true in the 1990s.

Nowadays, the pitch for learning Mandarin is that it’ll be great for your future career!

Hell, you might’ve watched Looper and thought “I should learn Mandarin” because everyone in the future apparently goes to China; despite the fact China has one of the strictest restrictions on foreign nationals in the world.

The Push for Learning Chinese in the late 2000s to now

For the longest time, a lot of people bought into the economic dream of China’s ascendency into being a rich, and open country. China today is rich but it’s definitely not open.

Everyone talked about the insanely fast growth of China and how we all had to jump on that train before it left the station. Essentially, everyone wanted the first-mover advantage of being the first in China. From businesses, academics, sportspeople, and individuals, there was a sense that you’d be missing out by not breaking into the Chinese market. Just look below at the GDP of China from 1969 – 2018 alone; it’s incredible! 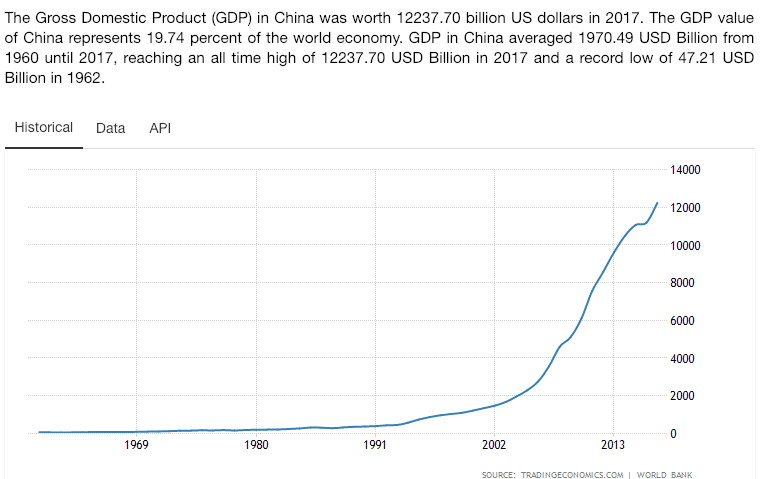 In a vacuum, that data looks phenomenal. In the wake up of the Tiananmen Massacre in 1989, the Chinese economy began to take off and explode. But, the story doesn’t end here.

China’s economic boom hasn’t been sustainable. Despite the massive growth in GDP, credit is spinning out of control, with China’s credit to the nonfinancial percentage to GDP reach almost 275%.

For every $1 dollar in China, $2.75 are owed back on credit in 2017. Most people are given the story of economic expansion in China, but very few people really look into it how that boom was paid for.

Well, here are some considerations worth reading to really know if you should learn Mandarin for your career.

Being a foreign Mandarin-speaker won’t get you a job

It’s a big market and there must be opportunities for international people that can speak Mandarin there right?

Well, you’re right and wrong at the same time.

Moving to a Mandarin-speaking country, you’d expect to have an advantage by speaking Mandarin, right?

You have an advantage over other people in the international workforce that can’t speak Mandarin, but that’s kind of about it really. You need to think, what is going to make me stand apart from the crowd? If what makes you stand out is your ability to speak the language of every other local person, then you’re not really standing out.

Don’t get me wrong, learning Mandarin is worthwhile if you plan to live in a Mandarin-speaking country. You can interact with people better, understand the local culture and society, and most of all you can read a menu and not order something you never wanted to.

But as far as having Mandarin as a way to distinguish yourself, it doesn’t really make sense. Speaking the local language of the country you live in isn’t a way to make you different, it’s a way for you to fit in.

I’m not making a judgment on anyone here, but I find speaking the language of the place you live in for a long time to be a minimum requirement.

What will get you a job?

Being shameless with your job hunt and a bit of experience is what matters.

Mandarin will definitely impress people, but it’s really not a solid way to get a job. The majority of people I know in Taiwan that have alien residency cards, or APRCs, don’t speak much Mandarin. My friends that do speak Mandarin have enough to navigate a Roald Dahl book with characters at best. That’s not a criticism, that’s a reality.

If you want to learn Mandarin for your career prospects, or for doing business in or with Taiwan, make sure you have the professional experience you need to get your foot in the door at least.

It takes a really long time to learn

If you were expecting to learn Mandarin quickly through Rosetta Stone or even formally in an educational institution, think again.

Even after 4 years of learning Mandarin in college, I’m still struggling at times. My tones are sometimes all over the place, even when I think I’m nailing the conversation.

Let me put it this way, for a native English-speaker, learning Mandarin takes roughly 2,200 hours of class study. You should also double that figure because you also need to study at home, write characters, memorize them, practice your tones, speak out loud, listen to audiotapes and read. So, 4,400 hours is how much time you should really think is enough. That much time is roughly studying 24 hours a day for 183 days straight until you can learn proficient Mandarin.

If you’ve ever learned a language, you’ll know, you can’t cram it. You can take the most intensive classes possible, spend 2-3 years of 5-hour classes a day, and still find your mandarin to not be at a level that is considered useful for a business meeting.

In short, if you plan on learning Chinese quickly to make your CV/Resume look better, think again. It’s a long process and you should only really do it because you want to fit in more, and understand the place you live more.

I cannot tell you how much speaking Chinese has made life easier for me in both Taiwan and China. You aren’t really just learning a language, you are learning a whole new way of thinking, and with that, you have a whole new way to read! It’s truly wonderful to just sit down and read novels in the language they were meant for. No lost in translation mumbo jumbo, just what the author intended meanings to be.

I apologize if that sounds pretentious, but I really do enjoy reading novels in their native language.

If you go into learning Chinese for business as being just a way to add something to your resume, then you’re probably not going to get past a low to intermediate level. Some people with that attitude become fluent, but the majority of them don’t get far after realizing just how much work they need to put in.

The minimum of spending 4,400 hours learning Chinese could be better allocated to learn skills that might help you to find a job in a Chinese-speaking region, and once there, you can learn the language.

Again, learn Mandarin for the right reasons, not just to add it to your skills. Again, over a billion people can already speak Mandarin, and it’s great that you could or can, but make sure to show off experiences and skills that can be complemented by your Chinese.